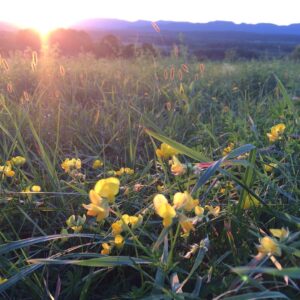 The morning on pasture gave a renewal to our spirits, even though each day was long and left us with the feeling that we had accomplished little.

I felt happy to be alive when I went to get the cows from the pasture covered with sparkling drops of dew. (There were days I wasn’t happy, when it was pouring rain, the wind was blowing hard and the cows and I walked through mud as we headed to the barn.) But they were happy to come to the barn and get some grain, fresh hay and to be milked. The ritual of the farm held us together. It established a structure for us, and a discipline on our time and our duty.

The farm had so much history. The feelings I have for All Time frequently swept over me. These fields, rocks, trees, distant mountains, had been here for ages. The farm itself, named Justa Mere Farm, was owned by the Cummings family. It had been a sheep farm in the 1800s when wool was highly valued and used for uniforms for the Northern troops. I hate to think of how hot it was wearing those uniforms. 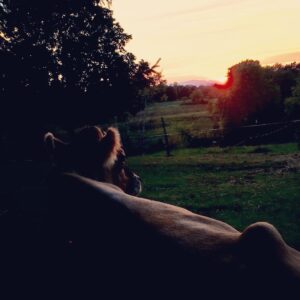 Later on, the farm became a dairy farm, and the main barn was added to, a section at a time. The fields all had to be cleared of stones and that is what the walls on the edges of the pastures and crop fields were made from. Old barbed wire fences were popular in that day as boundary fences and to keep livestock in place. Narrow paths went through the fields and the woods to reach fields that would hold a crop or to reach a pasture. Tractors these days could not even fit on those roads. And our tractors were very small compared to most of the ones seen on farms today.

Exhausted from the long day’s work in the beginning and because our kitchen had not been set up, we headed to a local diner to eat. The locals greeted us and were interested in where we were from, what we were doing and why we choose to have jersey cows (the smallest breed) not popular at that time. It was not long before the stories began about the previous owner, Glen Cummings. It seems he had hung himself and the farm was practically abandoned after that day. The next day having our brunch, we learned that not only had Glen hung himself but his father had as well, many years previously. There were as many conflicting stories as there were people, when it came to where and exactly how these end of life events occurred. It seems as if both had been suffering from cancer.

Thought was given to those who came before us and ended their lives here. I am sure they had loved the farm, the animals, and the land. I wondered if their spirits would be willing to accept us. I had encountered a spirit earlier in my life on an overnight visit to Concord, Massachusetts, in one of the big old houses. I settled into a small bed to sleep and on into the night the door next to the bed rattled. It woke me and I tried to go back to sleep. It rattled some more and I could not see any reason it should be. Finally I stuffed a pillow between the door and my bed. It was then that the whole bed shook and being very frightened, I pulled the covers up tightly to my face and held very still. The shaking continued for what seemed like a long time but it may have only been 10 or 15 minutes. I did not sleep much at all that night and in the morning I reported what had happened to have my hosts say that yes, this had happened before.

On our farm I worried that we would be accepted by these spirits who came before us, and there were a few nights in bed that the bed shook slightly. I was too tired to pay too much attention to it. I never tried to focus in on those who had been here before, but I always did try to honor and respect their efforts as they had cared for the farm for a long time. I have never liked to see scary movies and I stopped seeing them very early on in my life. And I’m glad I did because there were many smaller sheds and back buildings that I needed to go in that had no electricity. And I would travel into these with a little flashlight, and it could be scary if I had continued to see horror movies and dwell on spirits in another realm. I kept myself grounded in the darkness, my mind on caring for the animals and the earth. I liked to feel that there was a mutual respect for the daily devotion to the chores, the animals and the land. The farm did take over our lives and we lived in peace with those who had cared for it before.

It is said you have to love farming to keep doing it, and we did. It was not a job but a way of life, a way of caring, a ritual repeated day in and day out.