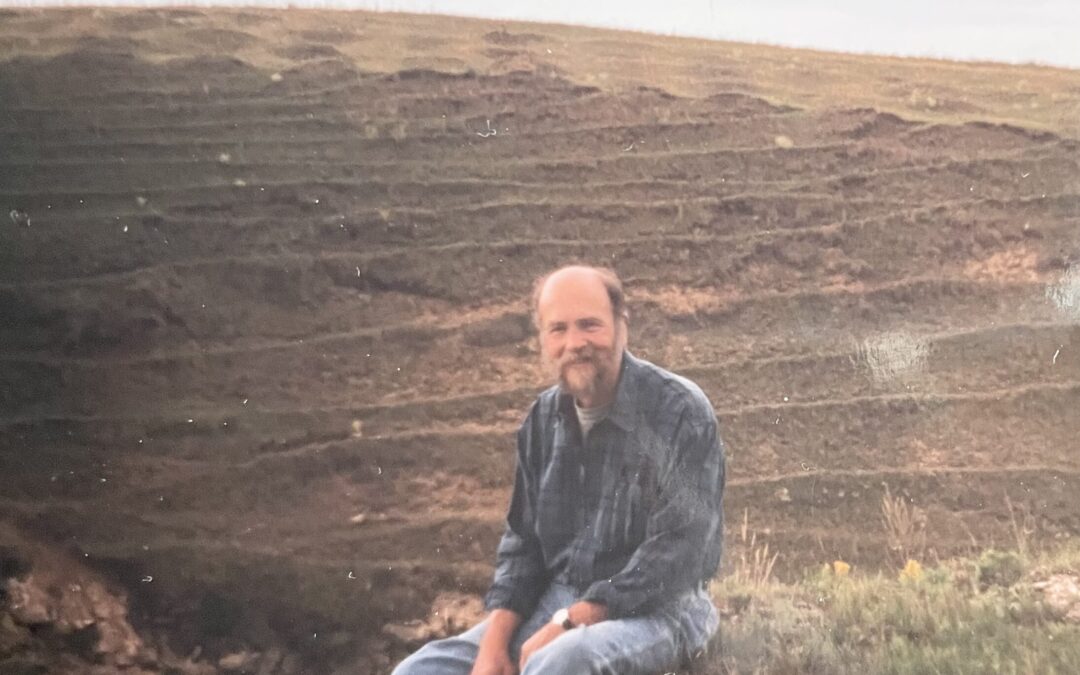 There’s a very good reason that I’m not too good at my words.

Last year ended up being a very difficult year as my husband Richard had a return of his prostate cancer, which coincided with his memory becoming much worse. It seemed like a struggle every day to take care of him and the animals and I would come out of the house in a disheveled state to meet friends that might stop by.

He didn’t sleep well. He’d want to go to the farm, which of course we had to sell 16 years ago as his knees got too bad to continue the farm work, but he thought of that all the time and did want to be there. I reflected on the fact that very few retired people look back and want to return to the job that they had throughout their life. But here, my husband Richard, he did. It was a life that he loved. It brought the world alive for him, working with the land, being with the animals, struggling to make any money, and he spread that enthusiasm to me as well. We really had wonderful times and sad times on the farm, but neither one of us would give it up for anything.

At one point in our farming time, Dick wrote articles for grazing, worked on the Sustainable Agriculture Grant Program, and he would go to the University of Vermont and other places to review the applicants and give input. He became known as a real grazing advocate. And surprisingly, one day, he was selected as a farmer to go to Moldova to teach the farmers there how to manage their fields with minimum amounts of machines (which they did not have) and to use the land simply and improve it through having their animals harvest the feed with grazing. Moldova had been part of Russia, and is now independent, but as he drove around the countryside, you could see remnants of old Communist farms, and the whole country seemed more like our country in the 1940’s with milk being delivered to the marked in jugs pulled by a horse, hay being baled loosely and being hauled to the barn in a big pile handled by pitchforks. A few farmers were able to buy a large machine and then they would rent their time out to help get special tasks done for the smaller farmers. 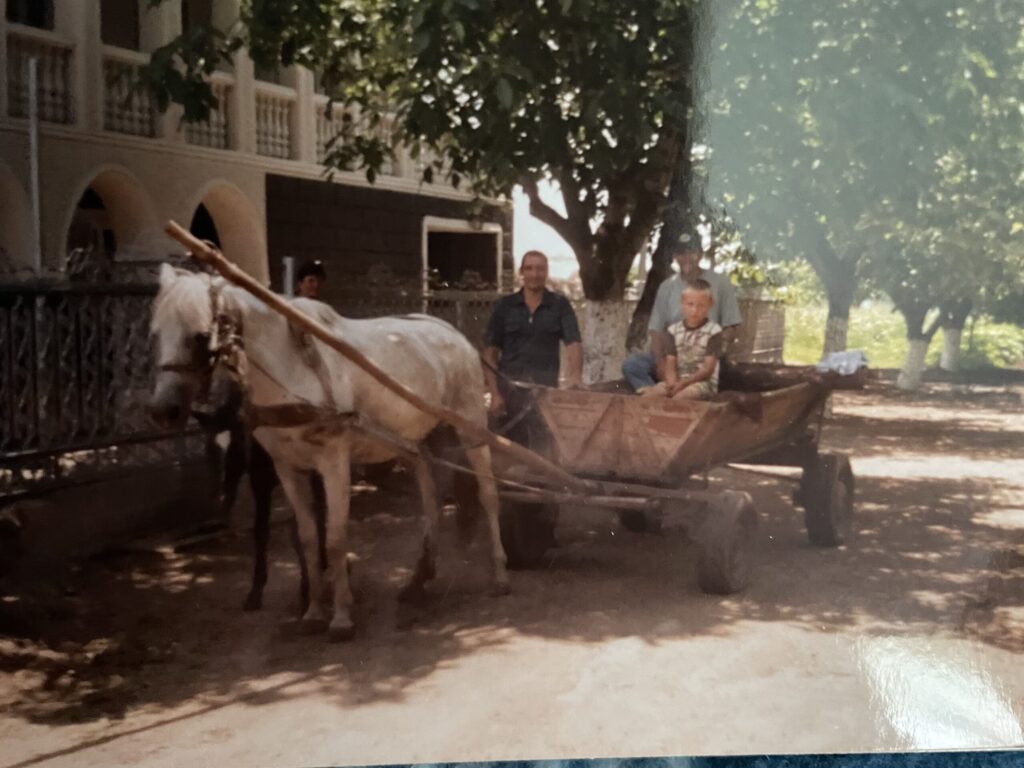 Bringing milk to the market 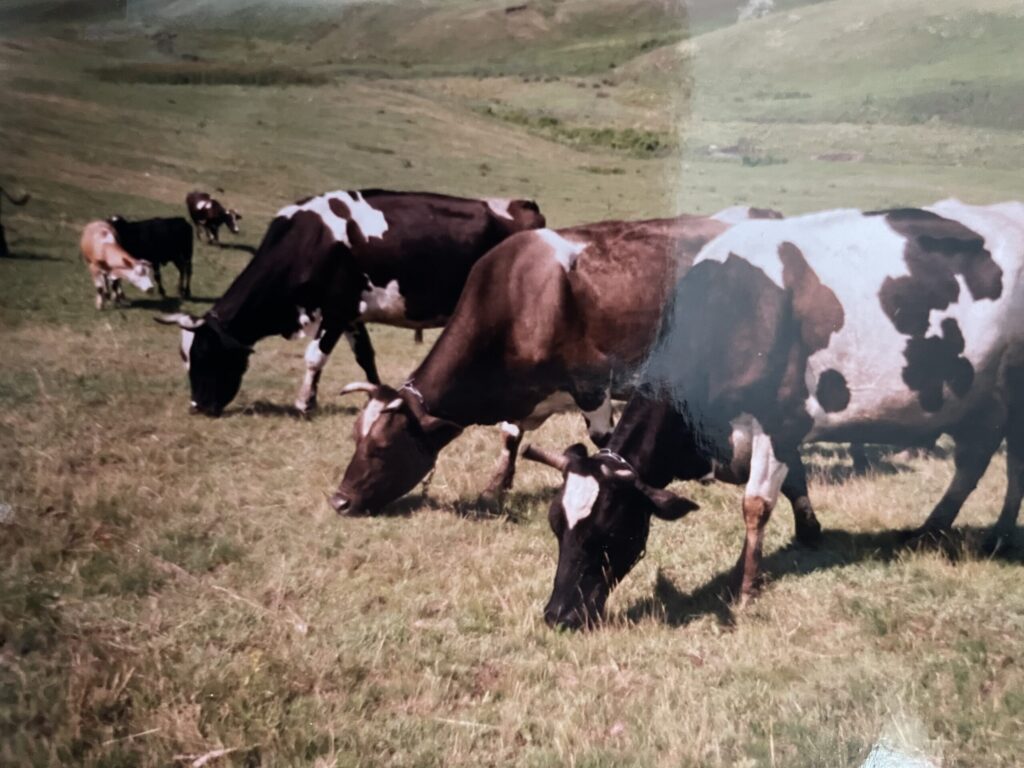 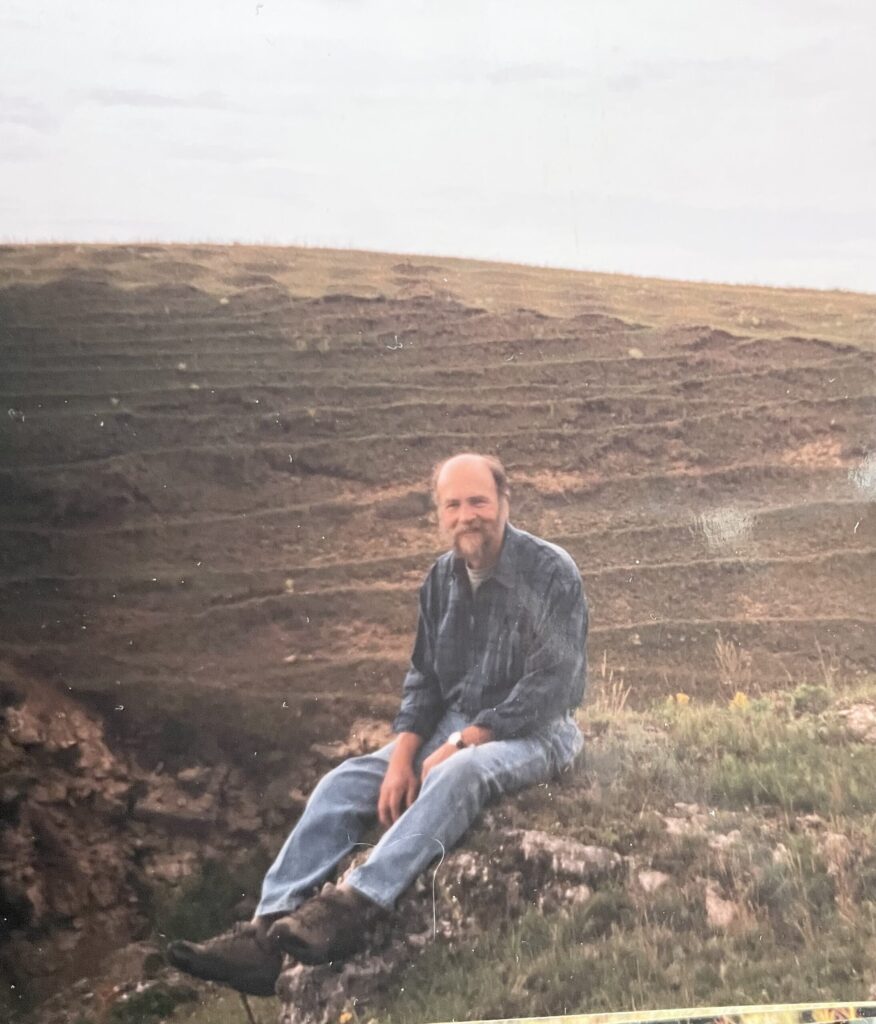 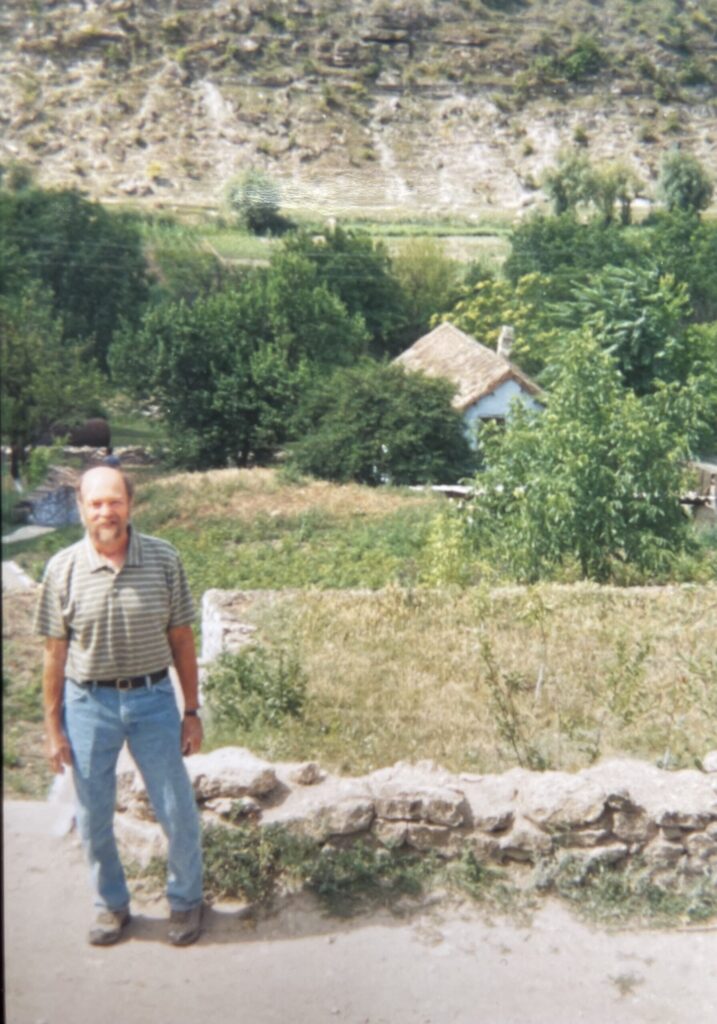 Dick by his cottage 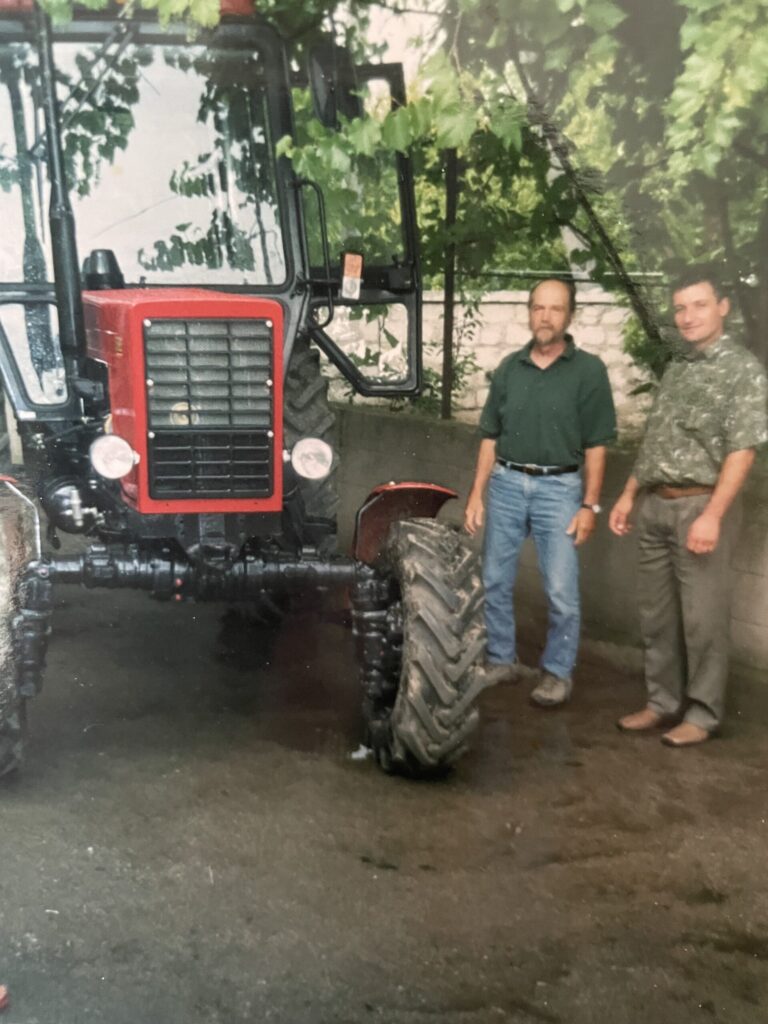 One of the farmers who uses his machine to help others 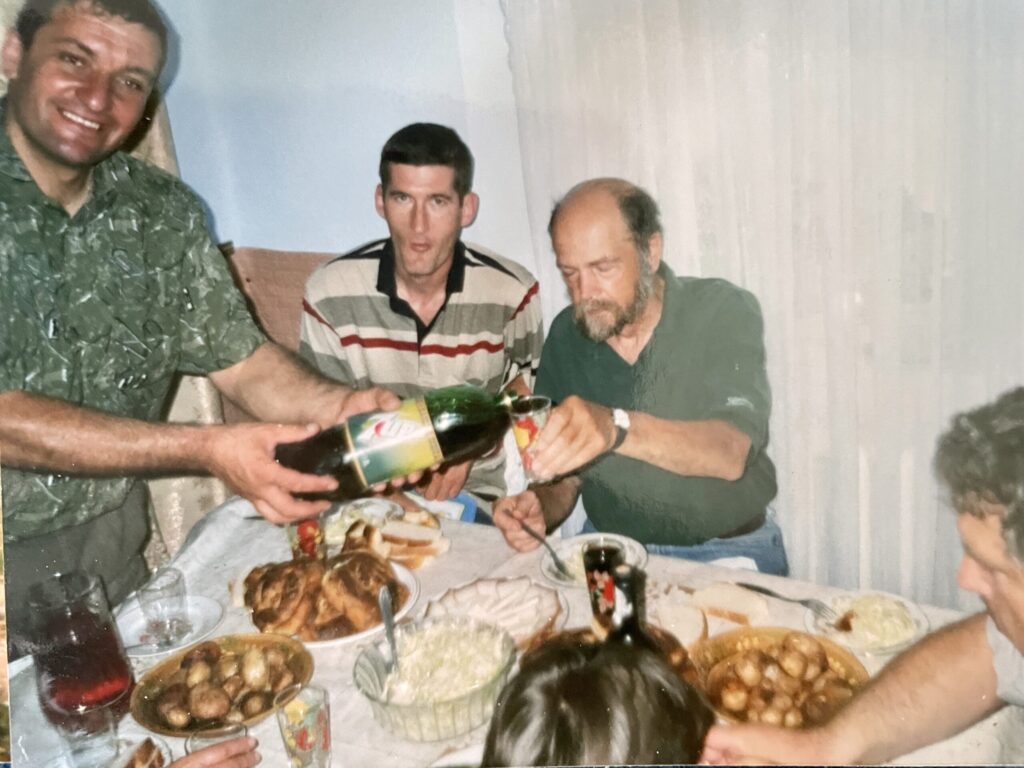 Dick enjoying a dinner and wine 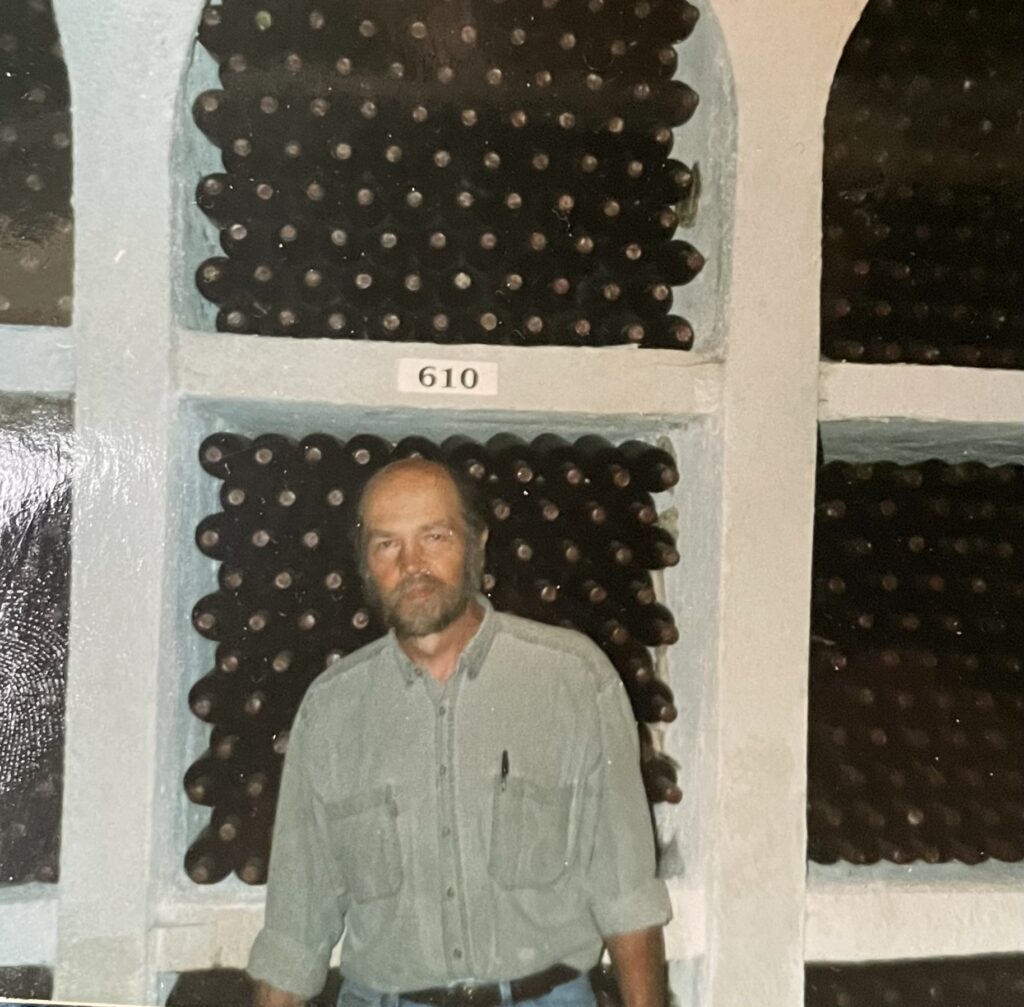 The people were so nice. Here he is in the wine cellar! 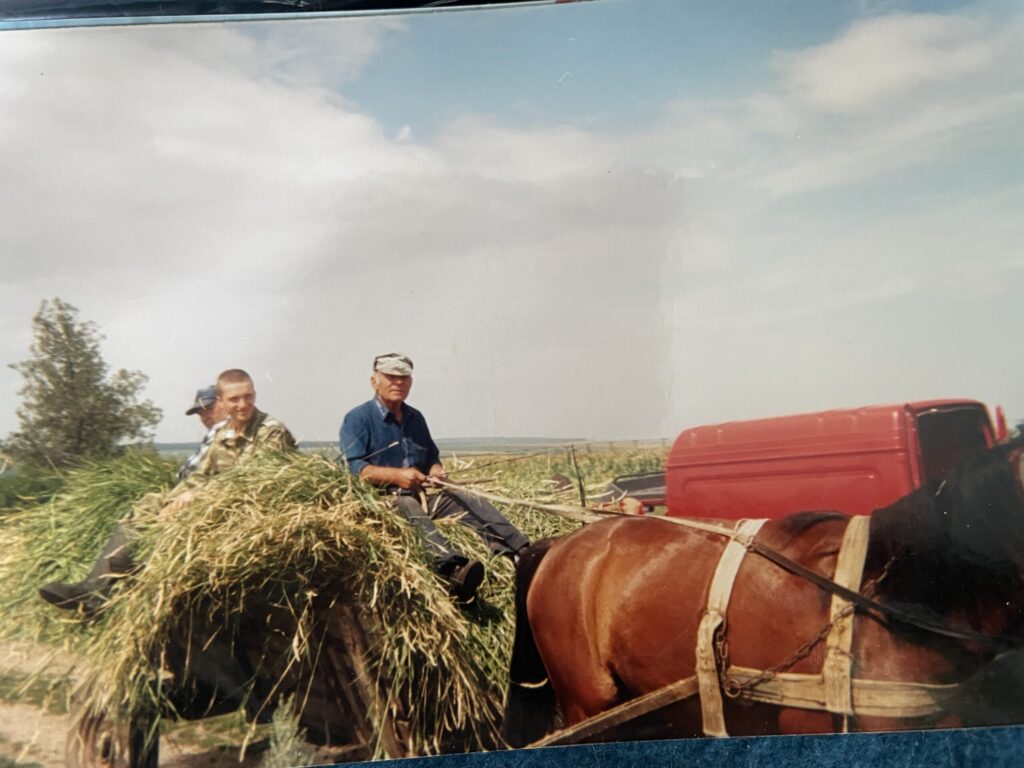 This is the way they gathered hay.

Dick got to speak to many farms and make lots of suggestions that the farmers felt helped them and they felt a new optimism to their whole profession. Dick also liked visiting the wine cellars in Moldova. We didn’t know that it was a major wine-making center in the world, with some of the finest, most interesting wines. And he was invited as a guest to have dinner with most of the farms that he visited, whereupon, besides their own homegrown food, he was always offered a magnificent glass of wine, and the people were very proud of it. He was there for about six weeks, while I stayed home on the farm and had help from different neighbors and willing people that were interested in our Jerseys and loved cows.

But it was a once-in-a-lifetime thing for Dick to do, and I missed him. And as I see him now in a nursing home, sitting and forgetting much of his past, I think back of how vibrant he has been.

It was in the autumn that he had trouble staying awake to have a conversation. He kept falling asleep. And on the other hand, he had trouble going to sleep at night. The whole thing was exhausting for both of us.

Then one day, at a doctor’s appointment, when he went in, he was very exhausted when he got to see the doctor. And the doctor discovered that his heartbeat and pulse were extremely slow and his blood pressure was very very low. At that point, he was sent to the hospital immediately. They realized that he would need a pacemaker to keep his heart beating at an adequate level to stay conscious, and they did perform the surgery, after which he was much better. He could actually stay awake. He stopped being agitated all the time and there was improvement. But he also had cellulitis in one leg that was quite severe, so he stayed in the hospital for a week, after which he was assigned to a nursing home. Fortunately, it is nearby.

We didn’t think he would be staying there, but they are very reluctant to release him and he does need a lot of care. I go in and see him every day and help out a little bit – bring him some magazine or story, some snack, and a drink to cheer up his day. But it has been a tremendous adjustment being at the house alone and looking at the things that we owned together and realizing that he’s not there.

Even the cats were completely thrown off by not having Dick in the house! One cat refused to even come into the living room, and Black Shadow was more inclined to attack the other cats and make things difficult for them, and now four months later, they are just getting back to adjusting and acting like normal cats. Not sure I can say the same about myself.

As spring arrives, though, I do look forward to getting some time to do my art. There was barely a moment last year when I could apply wax and start a little bit of dyeing. The leaves are coming out. The maples are first, then the beech, then the oaks. Blossoms are filling our yard slowly, one plant species at a time and it won’t be long before we can’t see the mountains to the West from our living room, but it won’t be a long walk to get to see them.

I think it’s my favorite time of year, spring… When the leaves are ethereal looking and the colors are gentle, kind of like fall.