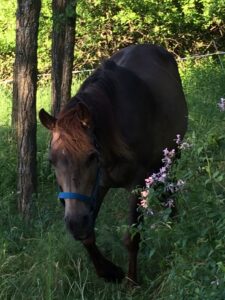 A whinny greeted me this morning and all mornings now since Star arrived on May 11th. The sound is music to me and I love hearing her and seeing her pretty self at the gate wanting to know when I will be out to feed her, brush her, walk her, fix a new pasture section for her. Vanilla has accepted her but his opinion is, “She thinks it is all about her!” Star needs reassurance that people are good and not going to hurt her. She had been treated roughly at some point in her past and lots of gentleness and carrots are doing good in developing trust.

What a contrast from my good cow Steppin. Steppin of course was older (Cows do not live nearly as long as horses do). Cows are large, slow and clumsy compared to a horse but they are generous and grounding animals to be with. Steppin was always patient and quiet Horses are swift and feel airborne by comparison and in their actual movements. Steppin found happiness is just lying down chewing her cud. Star is happy but wants attention.

Star was handled well by my neighbor’s sister Christa who got her out of a bad situation about a year ago. Christa had 15 horses already and did not have much time for Star. I am so grateful she gave Star to me. Even more remarkable, she drove Star here from Maryland, an over eight hour ride. It is a puzzle to me how Star has adapted so well and seems quite happy. How could she step out of that trailer and see a creature (That is how she saw Vanilla) she had never seen before and manage to walk into her side of the shed to accept the stall as her own? This in spite of his nasty face and spitting. Star quietly held her ground. Finally they have made peace and Vanilla keeps an eye on her where ever she goes. 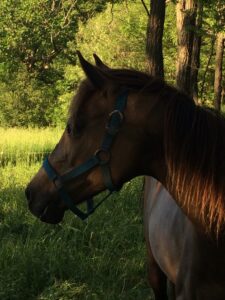 The pony’s full name is Starlight Serenity. Sadie arrived soon after Star, and we worked out this name between her ideas, my ideas, and her dad’s ideas. Her dad picked Serenity. Sadie spent lots of time brushing, leading and then lunging her.

Lunging is standing in the center of a circle with the horse on a long lead and giving it commands to work around you. So you would say, “Walk,” “Trot,” or “Whoa” and then reward the horse when it responds. It should be done in both directions and it’s very healthy for the horse in developing flexibility to both directions.

Star likes the attention of brushing but was very wary on the first sessions. Of course on such a long trailer ride where at one point she tried pushing under the front trailer partition, a horse will get bumps and bruises. If I tried to brush her legs she would stamp and squeal with a bit of fright. She accepts and enjoys the brushing now. Then her head. Horses are naturally head shy. As the brushing has progressed she enjoys her face being brushed. My granddaughter Sadie and friend Bex had Star closing her eyes as they brushed her face, The ears are a point of contention. Some times I can have her accept ear brushing but she hesitates. The bridle is a big resistance point when we get to the ears and the bit. I do hope to ride her and am actually considering a bitless bridle. Star, my neighbor Monika and I have taken Star for walks in the woods (She is a fast walker), great exercise! She has been lunged and learned some simple commands.

That attention thing though…. As I put out my dye buckets to prepare for my summer batik dyeing, Star watched impatiently…. Over here Carol, I need brushing, carrots, a walk… She does think it is all about her!