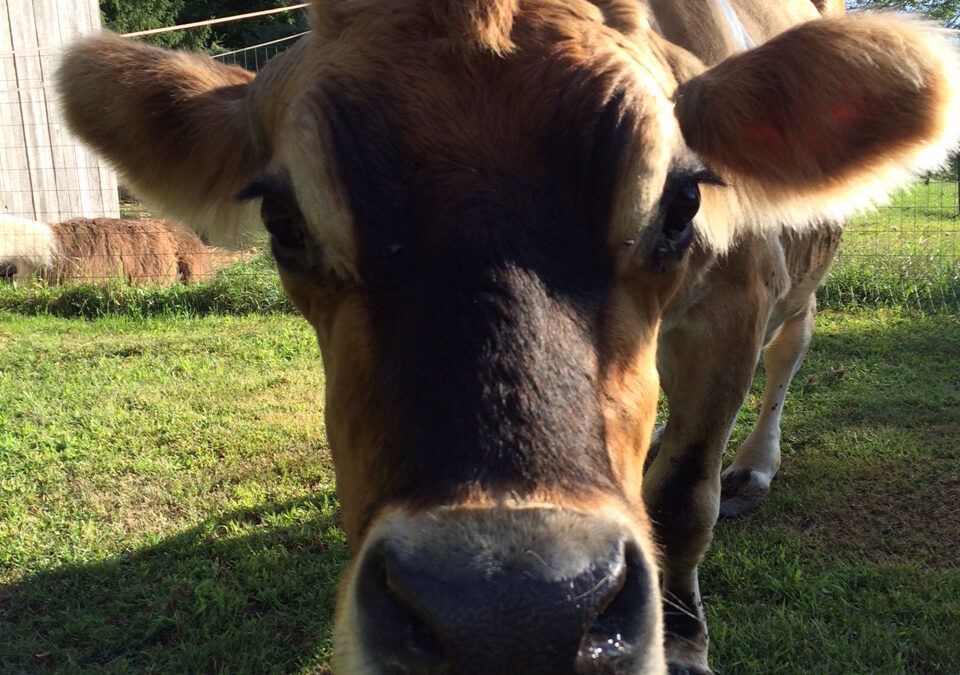 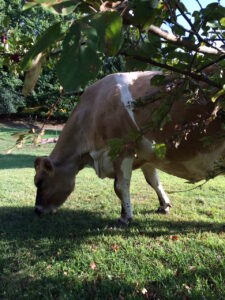 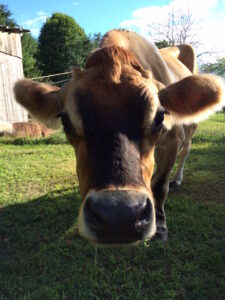 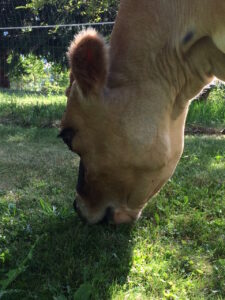 The cow is such a generous and peaceful animal. I got to know them on our farm, Amity Farm, that we had in Hartford, New York, for 28 years and these were Jersey cows. We grazed them over the fields for the warm months of the year and sheltered them in our barn and exercise lot in the winter. 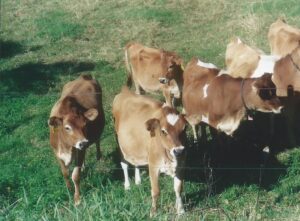 Steppin as a yearling. She is the dark red one on the right.

This post is about my old best cow, who is approaching her 13th birthday. You can see the picture of her with the group of heifers when she was about a year old, happily out in the pasture. She is the one to the right with the dark red coat and the white markings. She came into the herd as a heifer and her first lactation and turned out to be the high producing heifer that year. 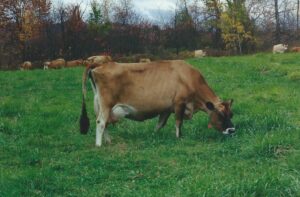 A fairly quiet heifer, and not at all aggressive, she lived on the farm until we had to sell when my husband’s knees failed. At that time, we sold our herd to an organic dairy in Virginia and a few cows were not eligible to be sold. Steppin’s dam Sable was one of the ones not sold. She was our oldest cow at that time, 13 years, and they felt she was too old to go. A few other cows had problems of being lame, or having had infections in their udders, and they were not eligible to go. Steppin had not managed to breed back that year, and not being pregnant she was not eligible to go. We managed to find homes nearby for these cows that couldn’t be sold, but held on to her mother Sable.

Steppin went to a farm nearby and they liked her a lot and were committed to trying to get her bred. After about a year, Sable became ill and we had to have her put to sleep. A terrible day for me. It was at that point that Steppin managed to have a calf, and I went to visit her. She was beautiful. She was just gleaming in light colors and her tail, white and fluffy. Her whole aura like an angel. And I waited several months, but then decided that I would try to buy her back and succeeded. Steppin was housed at a farm nearby where I helped to raise heifers and she was lucky enough to have a nice stall in their tiny barn with a nice water trough and good bedding and lots of good food, and I could be near her when I fed the calves.

I made her sound like an angel, but Steppin was not always perfectly willing at milking time for all people. She could be stepping around when it was time to get her ready to milk and put on the machine, flicking her tail in whoever’s face and wasn’t always popular except with me. Her full name is Steppin’ Up and although she was named when she was just a baby calf, I think she did live up to her name. She was not an angel, but now she is, now that she doesn’t have some of the challenges. 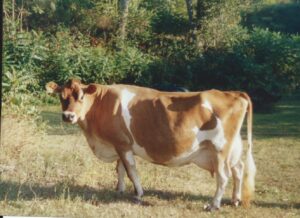 Steppin at four years old, after I bought her back

As time went on, Steppin got older and found it harder to get around, and I felt I should take her home where my husband and I built a small lean-to that she could live. We decided she should not have any more calves, that it would be too hard for her. A neighbor had a llama that he needed to find a home for, and Vanilla came to live with her and be a friend, a good companion. They made terrible faces at each other for a while, but now are great friends and have adjoining stalls and either one gets quite upset if the other one is out of sight, but they have each other there all the time.

I hope she will be here for many more years. The average cow in a herd would have been gone long ago, but having the more natural life, I hope I will see her friendly face for many years to come. I know that will not always be the case, so I will enjoy seeing her while I can. This is a tribute to my old best cow.