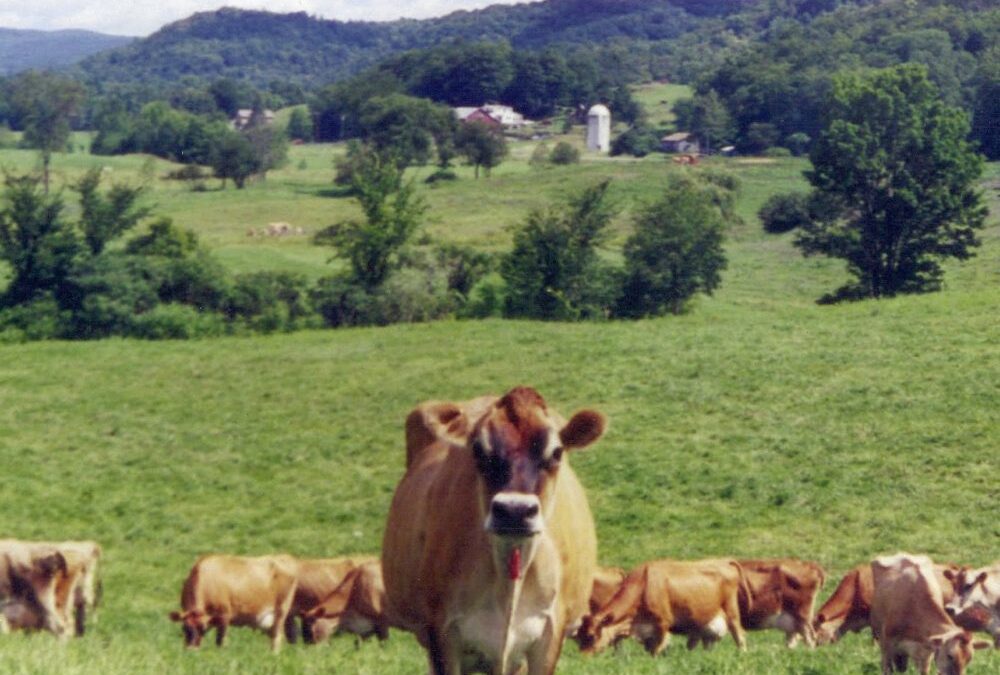 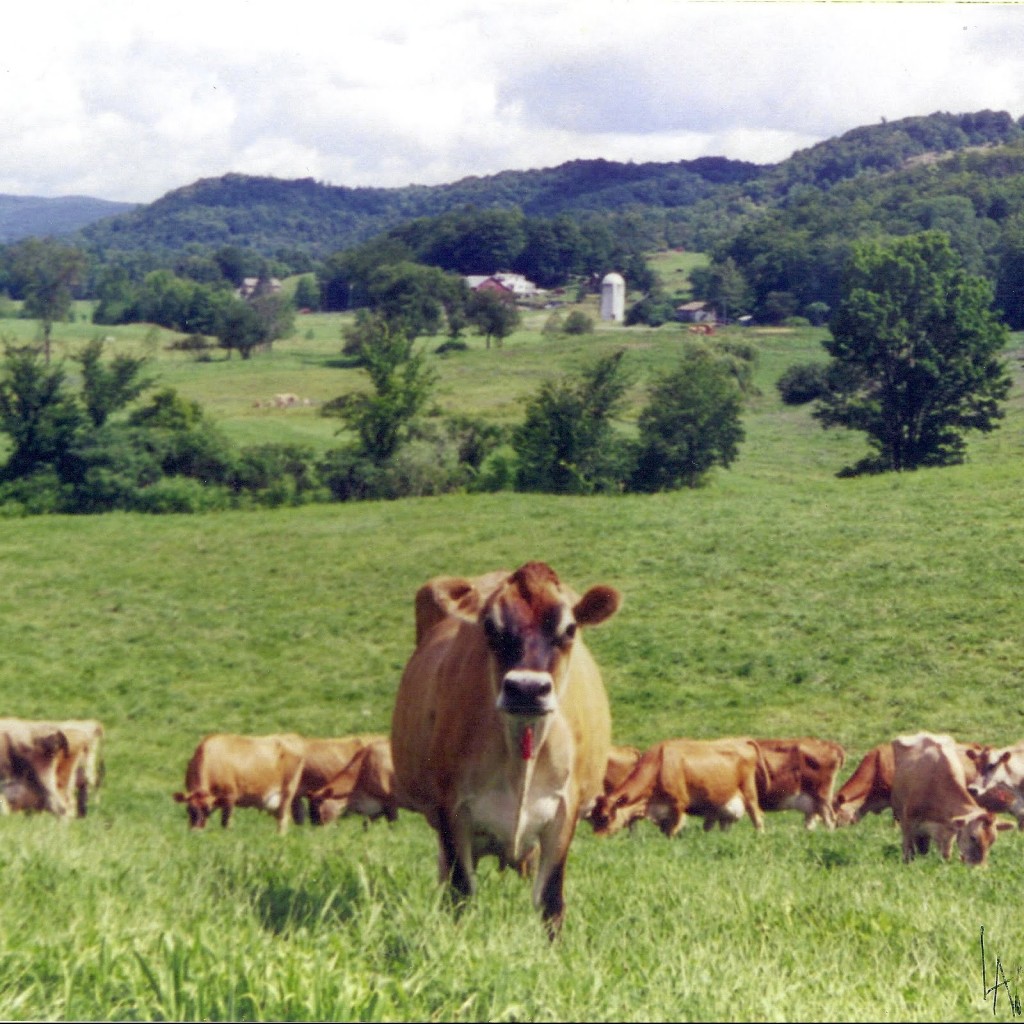 It is said you have to love farming to keep doing it and we did. It was not a job but a way of life, a ritual repeated day in day out with exciting and unexpected events both good and bad. We loved the animals and loved the land. Here is the memory of our arrival to Amity Farm that took place on Memorial Day weekend many years ago. 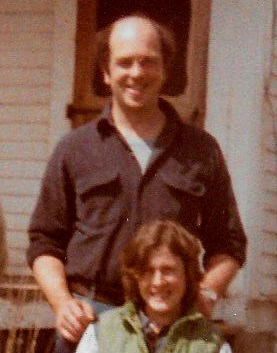 My Dad was here in upstate New York with Dick and me to get ready for the cows to arrive on Memorial Day weekend. The progress was slow as we carted away the junk from the house. The time left abandoned had allowed a musty smell to creep in to the house and the smell of rat poop added to the stench. We finally arrived at empty floors and attacked the cobwebs, swept and mopped the floors. We had sawdust delivered for the barn, grain for the cows and supplies for the milk room. Gibson Hardware came to get the milking system up and running, restore the water and replace some of the water bowls. The rusty old gutter chain came to life and showed promise that it would convey the manure out to the spreader parked out back.

We moved on with our moving in and then the lifeblood of the farm ( our jersey cows ) moved in as Memorial Day weekend approached. Dick stayed on the farm with my Dad as I headed back to Massachusetts to return with 15 cows. I helped the trucker load the cows and he headed north with them to the farm while I loaded up lots of our packed things and furniture, all that would fit on the Dodge truck we owned at that time. The trucker returned and we loaded more of our youngsters and then headed north. I would be back to help with milking. 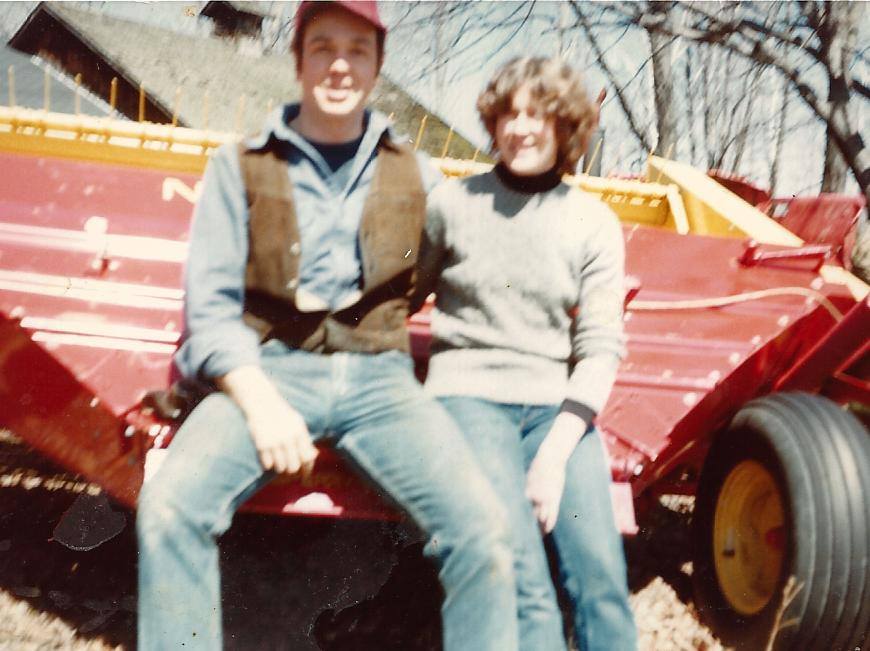 Dick and I on our new mower.

The cows of course were very confused being moved and here in a new barn after a long ride. We had an old stantion barn and quickly found out that the stantions were not small enough to hold the jersey cows. Most farms had Holstein cows as this one had, a much larger breed. The jerseys would go to the stalls with a small amount of grain as the reward and would get more when settled, but could pull out and head off when they finished their grain, some walking off with the machines still on, the milk pails tipping over. The old saying don’t cry over spilled milk was a hard thing to do. My Dad found himself passing out small dots of grain to keep the cows in place until they were finished giving their milk. The Stantions were adjusted over the the next several days. The old bolts were hard to move having been rusted in place for many years. 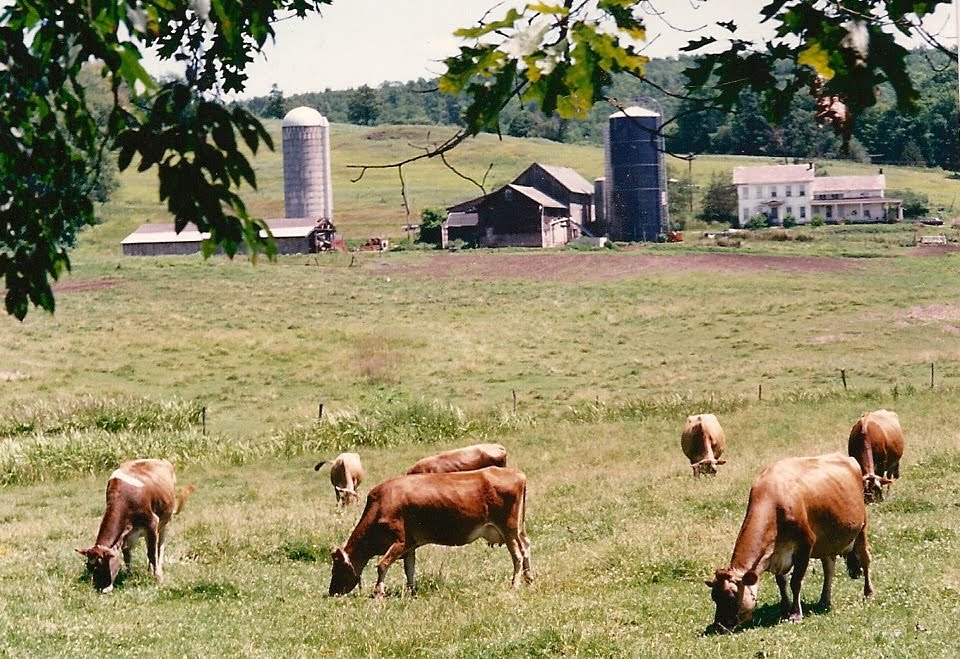 Cows in trees below barn

The next day the same routine took place, I headed back to Massachusetts and Dick worked on the fences and harvesting machines. My Dad made repairs all day to the house and barn. Again I helped load the fifteen cows and packed furniture and household belongings in the truck and headed back to the farm. This went on for five days. Some days there were two loads of animals heading to our farm as we had calves and heifers of many ages to find their place on our farm. Fortunately it was pasture season and the animals were happy outside eating spring grass. We soon found out that the fences had many weak and rusted spots and struggled to repair them as quickly as possible. I became the fence person while Dick began to deal with the crops. It was hard work but I enjoyed working on the fences. I would get help when a larger post needed to be replaced, but strung new wire and used small plastic posts to fill in. I loved being outside and the cows seemed happy to have me near. I came to be grateful for the time spent out on nature with the cows. The fences were moved daily to provide fresh grass and it made an enthusiastic herd to see what field they would be going to today. I loved to watch as they tore into the fresh grass and enjoyed the sounds of grazing. 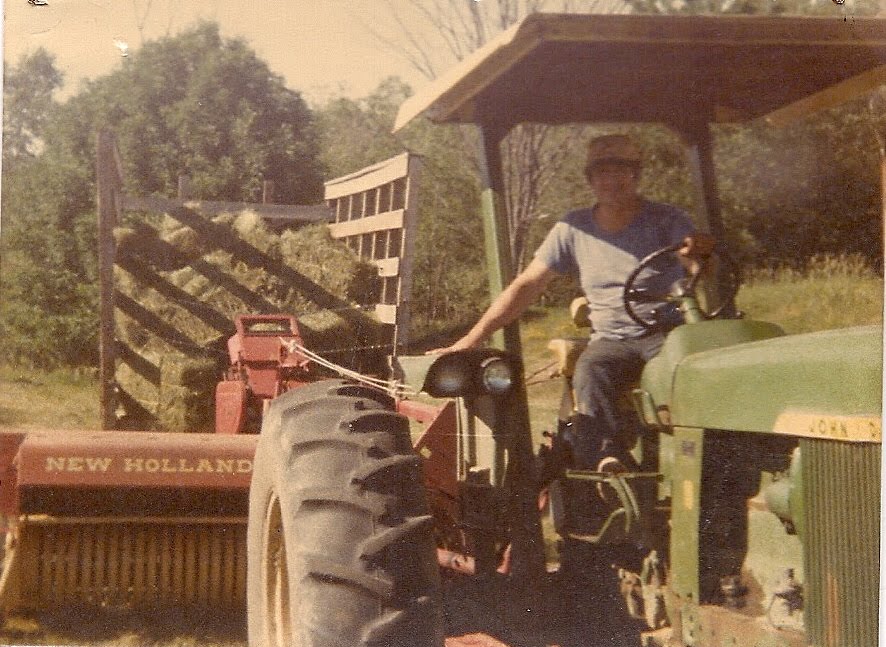 I could now prepare meals in our own kitchen and we would all sit down very tired to the end of day meals, almost falling asleep at the table. It always seemed that we had barely accomplished a thing there was so much that needed doing. As the weeks went by I learned to look at what had been accomplished rather than what had not, something I still have to remind myself to do. 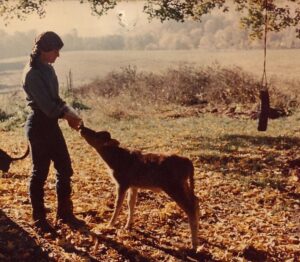 Me and a calf in Tyringham 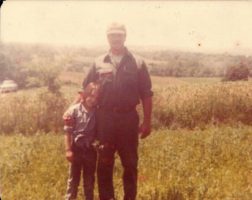 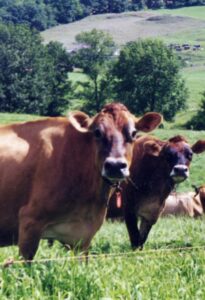