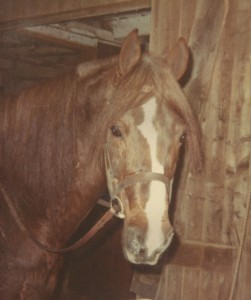 Justa Dream portrait in the barn

“I think I have found a horse for you, Carol,” the old horse trader and trainer, Leo, said to me. My heart jumped for joy. I had been riding and helping with chores at riding stables all through my teens and just lived for the day that I could have my own horse. Finally, my folks had said I could, and here was a beautiful young three-year-old gelding, standing in front of me. I was just enthralled.

I had wanted to have a Morgan horse for years, after reading Marguerite Henry’s book, Justin Morgan had a Horse. This horse was not a registered Morgan, but he looked like he was, and I was so happy. I called him Justa Dream, after the Justin Morgan horse in the book.

He would do whatever the old trainer wanted him to do, and he told me that he came from a woman who had owned him but was afraid of him, and couldn’t control him at all. But he felt that in time I would be able to work with him well.

Justa came home to our old barn and got lots of attention, but proved to be a very challenging horse. I don’t know how many times he bucked me off and ran away. I don’t know how many times he liked to bite at me, and people who came to visit. He also had a lot of jumping ability and would jump out of his pasture and run away. But I persisted. I’ve been told I’m stubborn. I call it persistent. 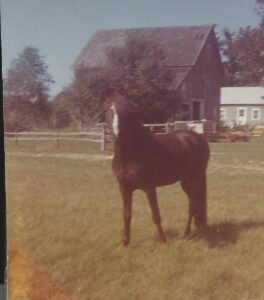 Enjoying the day in the pasture.

One day, when I was riding him on the dirt road nearby and he was so frisky, dancing and prancing, he threw his head back at me and he knocked one of my teeth out. Being 16 years old, I was just horrified. I was mad, I was hurt, mentally, because a 16 year old girl doesn’t like to think of herself as having lost a tooth, and I was just beside myself. I jumped off him, grabbed my tooth, slapped at him a bunch of times, and I was yelling at him. He was dancing around in his normal fashion and I took him home, took off the saddle and bridle, and locked him in his stall. Mad, I was mad. Really mad. I decided I was going to sell him.

After my trip to the dentist, I came home to see my horse. Fed him, let him out to the field, and realized that if I wanted to sell him, I had to train him well or no one would want him. I got back to the stable, and set out to saddle and start working with him again. 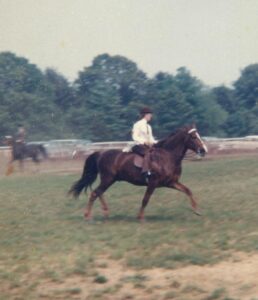 And after a session where he tried to run away with me and I pushed him on to run and run and run until he was tired and didn’t feel like running any more, we kind of did settle down to training. We did circles, we did stop, we did trots at different speeds, we did back up, we did canter in both directions of the ring, we did Figure 8’s, and we learned to back between stationary logs on the ground. Eventually he did everything quite well. Quite well. 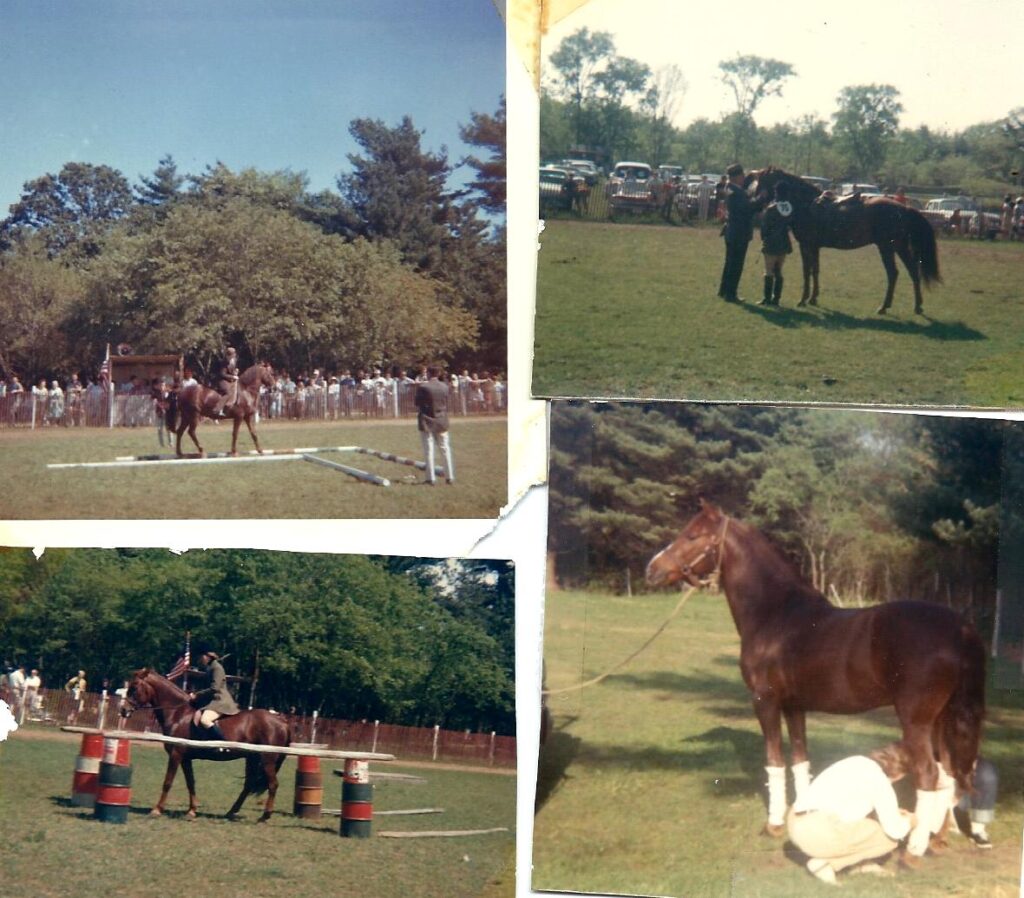 Justa goes through his paces at show trail horse class. 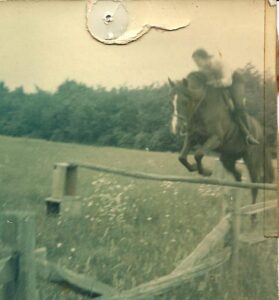 Jumping practice… He loved to jump!

The day came when I took him to a horse show. My first show with Justa Dream. It was, of course, so that I could sell him after the class. I put him in several classes. We went in and he won! Several people came up offering to buy him. But you know what? I didn’t want to sell him any more.

Going home, I was happy with my horse. He was a dream. We found that we were very happy working together, and Justa Dream would respond to the lightest movement of my finger or body in going through the commands. What also happened though, was that he was not happy with having a different person ride him. He would become very stubborn and might just back up for the whole session.

We went on many trail rides after that, and lots of shows, and Justa Dream became a show champion. In fact, he was a New England champion in his division for several years. Because he was so good at jumping out of the field, I decided to also take him in jumping classes, and he did very well there as well.

We ended up having a wonderful life together and he will always hold a very special place in my heart.