He is sitting beside me on our trip to the Memory Center in Bennington, Vermont. My husband Dick had a diagnosis of early Alzheimer’s last fall. I knew it was coming as he would ask the same questions again and again, become anxious especially at night and go over things repeatedly.

He had had a hard year last year with knee replacement surgery that should have been done ten years before, but the insurance company had refused to pay for the first surgery and the discouragement from that was etched in Dick’s mind for good.

Years of financial uncertainty and low income plagued us when we were on our beloved farm, and were stuck in his mind. He could not face that trial again when he needed another knee replaced. But then after encouragement from our small family and pain itself he relented and in April 2015 we took on the second surgery.

Dick reacts badly to anesthesia and it took three days for him to become coherent and stop struggling to escape. Quite a task for all involved and had me staying the night, getting no sleep the first twenty four hours.

Recovery started well with help from home nurses and PT, but then six weeks later infection set in and endless trips to doctor offices. Skin cancer was also discovered and then eyelid surgery and shingles………He remained stoic through it all. I would remind him how strong he was and we moved on together as we had all those years on our farm, together day in day out.

The tests showed an improvement which confirmed my observations that he was remembering some of the things I said the next day. Now we have to make a decision as to join a trial for a new treatment that will help detangle the amyloid plaques in the brain that would potentially slow the disease from causing a decline.

I have been organizing my show for Valley Artisan Market “Myths From the Wax” and two of the batik in the show have Neptune and then Poseidon riding the seahorse, which is called the Hippocampus, like the brain. The name for the seahorse came before it was used as a medical term. The part of the brain that is called Hippocampus is shaped like a seahorse, which is why they called it that!

The fun thing is that the Memory Center is a place to study the mind and the brain. And here in the lobby is a beautiful statue of the seahorse. 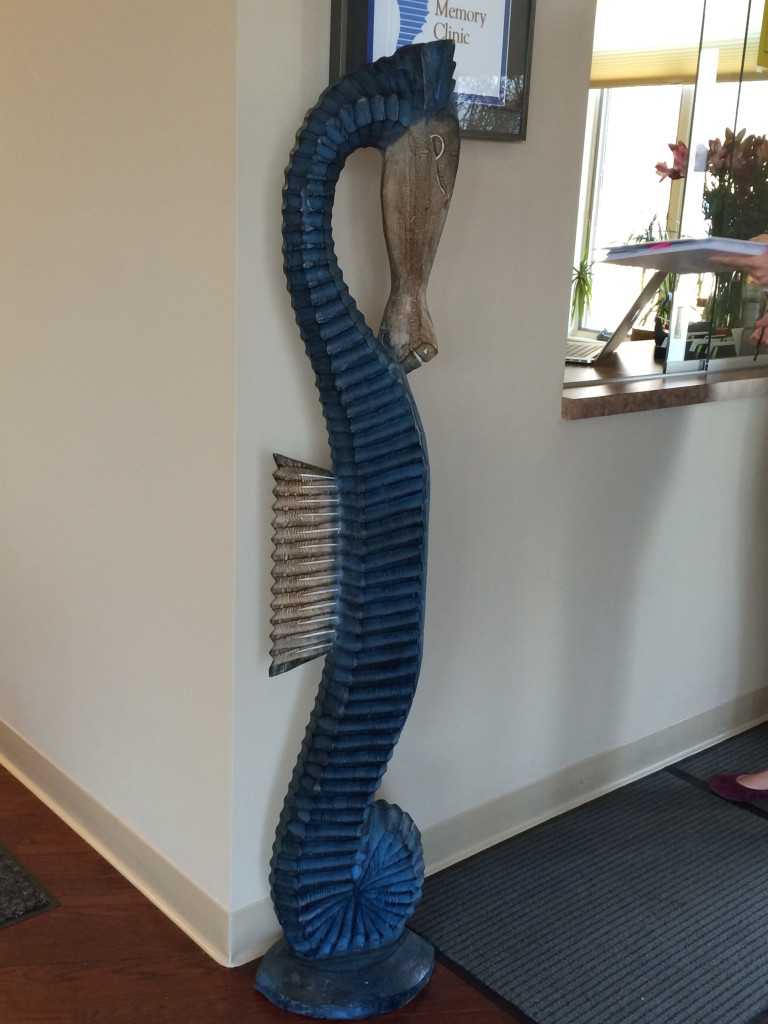