I looked down into the well-bedded stall of hay and saw the bright colors of gold, white and black. A tiny little kitten, a calico. I always think of calicos as a jewel of cats. It was my kitty Singer when she was born, and it was 15 years ago in August that it happened. I really can’t say what day it was. On a farm, we had so many cats and they were always having kittens. 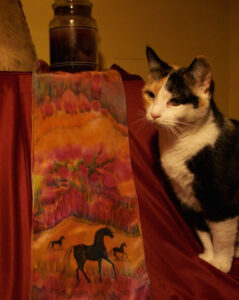 This litter was especially beautiful to me with the little calico lying there, tinier than a mouse. The unfortunate set of circumstances came when Singer’s mom was hit by a car and killed, and we took the litter of kittens and put them into a big stall that was for our cows to calve in and was nice and clean and we could keep them safe and away from other animals so they could get a good start on life.

Soon after that, though, I developed a bad infection in my arm from working with a splintered fiberglass fence post and I had to go into the hospital. I was there for 16 days and they were afraid I would lose my arm. I was very antibiotic-resistant.

I didn’t think of Singer a lot those days in the hospital, but I sure thought about being home and how was everyone doing, and Dick was feeling frantic with all the work that had to be done. Fortunately, our daughter Jaka returned to the farm to help him. When I got out of the hospital, which was at nine o’clock at night, Jaka came to get me, and we went home to find a sick calf waiting for us. She and I worked with the calf to get fluids into it and set it by what we called a hot jug, a jug with warm hot water that would help to maintain the calf’s temperature at a healthy level and help it to recover. It worked, and the calf grew up to be a fine cow.

Back to the barn, though, my little jewel of a kitten, Singer, had grown a lot. People had put food in for the kittens, and milk and water, and they were doing fairly well with the exception that they had eye infections. I brought Singer to the vet and I got medicine for the eyes. Most of the kittens’ eyes healed quite well, but Singer has one eye which remains cloudy to this day, that she can see out of a little bit. Her other eye, thankfully, is fine. I brought Singer back to the house, and from that day forth she became my friend. She insisted on sleeping right next to me every night, and still does. Singer would burst into purring at the slightest touch, and seemed to be so grateful to be with me. And I was very grateful to be with her, as it was a long road to recover from my hand and arm surgery. 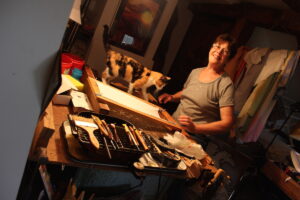 Since then, Singer has been my studio cat. She was fascinated by me using the tjanting tool that makes lines of wax on my fabric and watched intently as I developed my designs. Singer has been very active but two years ago developed a hyperthyroid condition and has been getting medication twice a day for it since then. She also developed kidney problems. Her appetite has been poor, and she never was a great eater, very fussy. In spite of being very thin, she persisted at being active and seemed to be purring happily a good deal of the time, and continued to enjoy watching me do my artwork. 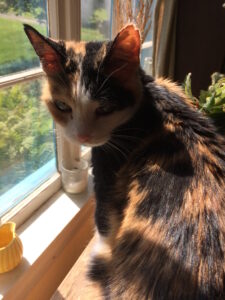 This spring, however, Singer at 14.5 years had a very bad spell. She ate very very little and I brought her in to the veterinarian who gave her fluids and injections and some other medications. In spite of giving her these, she continued to lose weight and over a period of two months she dropped down to 4.8 pounds.

I continued to bring her back in for fluids and steroid injections to help her to feel better, but she continued to not eat. Just at the point when I said to myself, the end of this week, if Singer is not eating, it probably is the time for her to pass that rainbow bridge, and I could not imagine that time coming. The day before my plan to bring her in to the vet, she began to eat. She brightened up. And she stayed that way!

Although she still isn’t a big eater, she is eating, and she is purring, and she seems happy.

And even though I don’t know the exact day she was born, I call August her birthday, and hope she will have a few more.