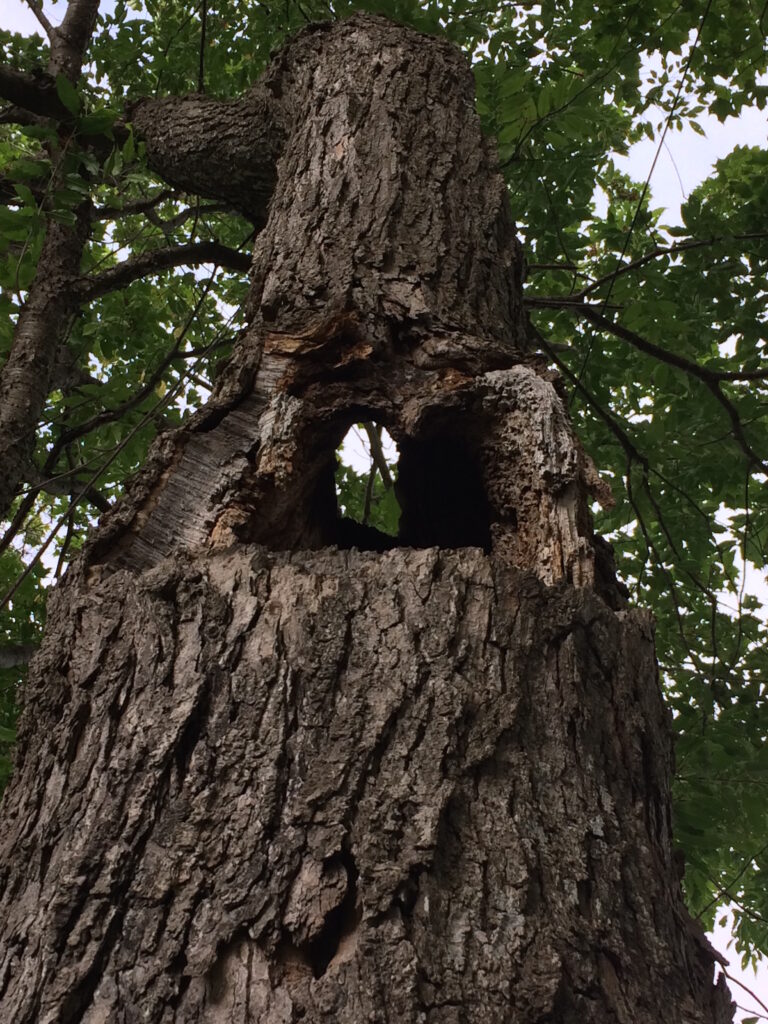 I was eager to get Jon Katz’ new book, Talking to Animals, and after reading it, I became very inspired to try to send some of the mental images that he spoke of in his book to create an effect or manifest a change in an animal around me. After speaking with Joan Reid, I learned of the tremendous effect that humans can have on energy.

So as I watched the sawdust falling from our house from the work the carpenter bees are doing on it, I began to wonder if I could put my intention to work on getting them to find a new home. I spent some time before them trying to picture the images Jon Katz spoke of in his book, of speaking to animals with images. And I didn’t find it all that easy to do, which surprised me in a way because I am a visual artist. I found it much easier to think of words for them. 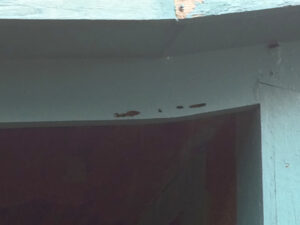 Here’s above the porch by the side door. You can see the work that the carpenter bees have done.

For instance, “I really need this house. I can’t have it fall down around me. It’s been here since the 1800s and I want it to continue for a long time.” I realized that the carpenter bees have a purpose in our world just like the rest of us and I tried to think of what it was. I realized that their job was to break down dead wood.

So I started thinking of where there was dead wood away from our house. At first I thought of the stream and the deep ravine, which is maybe 1/4 mile away from our house, and there are a good number of dead trees in there which could stand to be broken down and returned to the earth. I spent time visualizing these trees off by the brook, and I concentrated on the carpenter bee. As I stood there concentrating my mind on them, a lot of them did come out of the wood and swarmed around, but did not bother me. As time went on, and it was maybe 10 minutes, some of them did fly away. I had my hopes up.

They did come back later. I tried to think more of the purpose of the carpenter bees and what they were doing, and realized that they were also pollinators, which provides a real benefit when you’re growing berries and vegetables and you want flowers and fruit. I found out that they do lay eggs in the wood and I wasn’t sure if I got them to leave, what would happen to the eggs? Would they move them? I have seen ants moving their eggs if their nests are disturbed and had to stop and wonder. 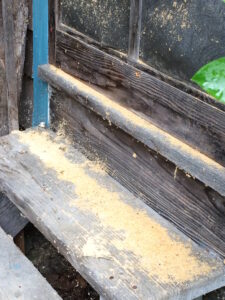 The sawdust on the doorstep

Carpenter bees look like a bumblebee, but are not bumblebees, and have a shiny back end rather than the fuzzy back end that the bumblebee has. They are also very placid. I would not want to stand so long outside of a bumblebee’s nest. I also learned that the males are the ones that come out and gather pollen, and the females stay inside with the larvae or eggs. On a hot day, I saw a plump carpenter bee working its way through the circular hole in to the nest, its legs loaded with pollen.

So I would have little sessions of standing, working on the images and realized I was trying to send them a long way away. Maybe not a long way away for a bee, but it was hard to imagine something specific that distance. Then I found a tree right in our front yard which was decaying and had significant rotting that had taken place. I had seen woodpeckers near it, and I thought, boy, that would be a nice place for the bees. So I started imagining that tree and hoping that maybe they would find that to be an attractive home, and they wouldn’t have to move far. 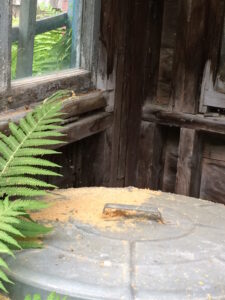 The sawdust on the trash can

As the weeks have gone by, now and then on a hot day I will hear the carpenter bees out on the roof by our side door and go, “Ugh, they’re back! Will they ever go away!?” And then I try and take myself and calm down and re-establish a connection to them and visualize that tree. There are many fewer bees there now, and I haven’t cleaned up the sawdust that fell on the doorstep and the trash can out back, but I’m hopeful.

I don’t know what will happen if I succeed in getting them to move and then in the spring, the larvae hatch — will I need to start all over again? And if I do, I had better start much earlier to get them to move before they decide to lay eggs. So this morning I spent some time below the big tree in front of our house, looking at it and imagining the carpenter bees, and hope they are finding this as a good home. Good luck.

I’m sure there are different types of wood they would like. Some that are much more attractive to drilling into to make a home than a big dead elm or a hardwood tree, and that is a factor to them finding a comfortable home. I hope they can find wood that makes them happy that is not in my house. 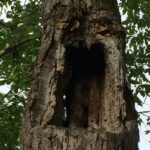 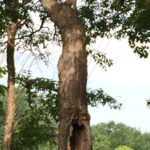 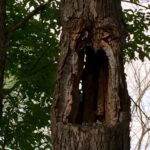