Caught in the Thunderstorm 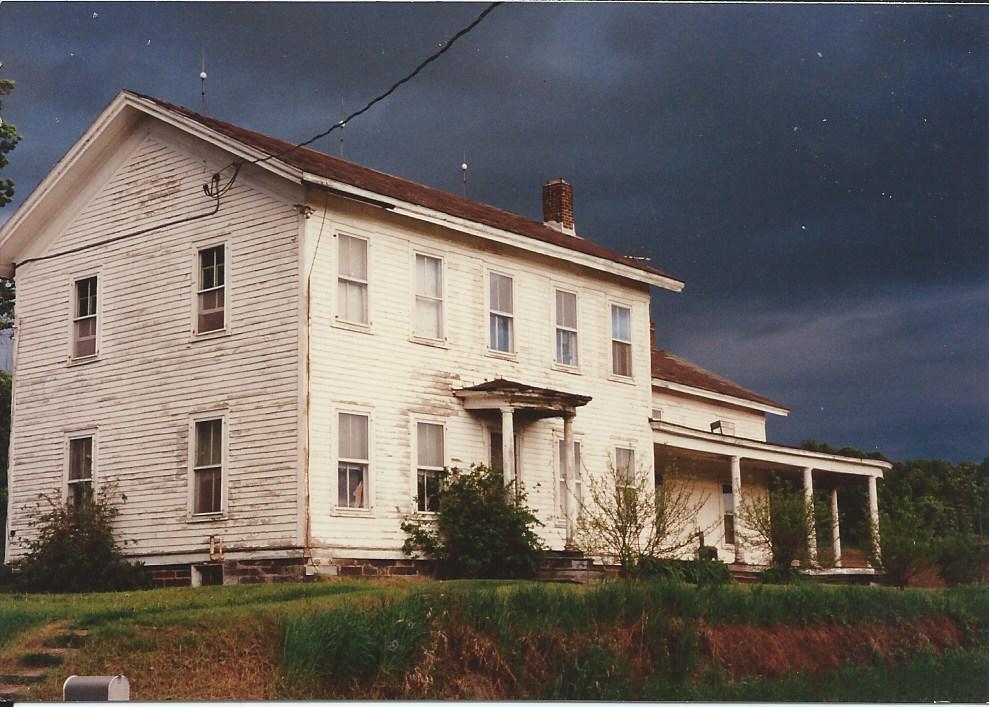 Our old farm house, before the storm.

Nature has a frightening and powerful aspect to it that is also fascinating. How small we are in the plan of Mother Nature, here on Earth. How much we are at her mercy, despite all of our efforts to outsmart her. 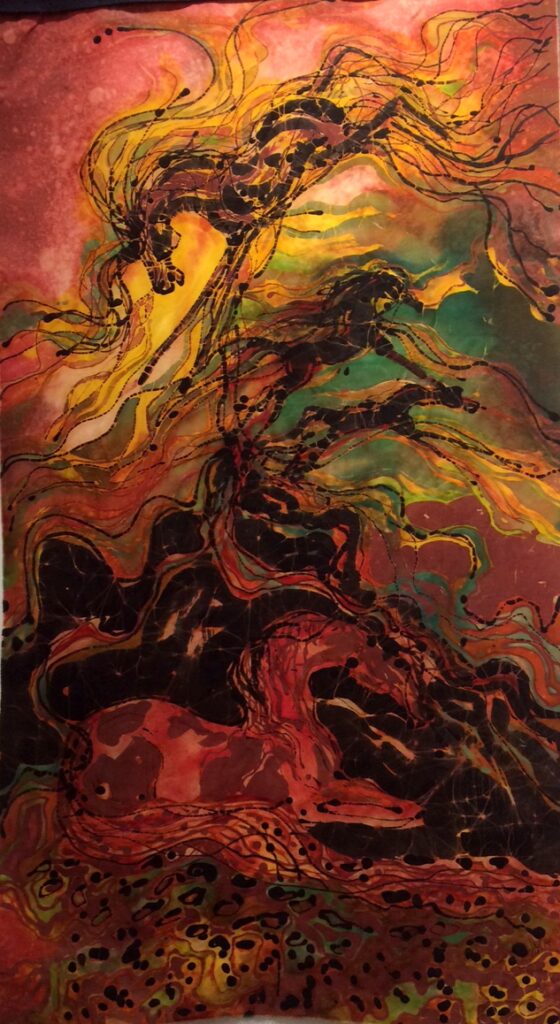 Caught in the Thunderstorm

Back on the farm, thunderstorms brought a lot of fear into my life. There is no safe place in a thunderstorm. I remember electrical snaps and sometimes a flash in our big old farmhouse.

The sounds would be so powerful and loud, as if the sky were issuing rage. The sound alone would practically drop a person to the earth or the floor. I always feared for the animals who were in the pastures where the sun usually cast a benevolent and peaceful glow.

One night, in a very powerful storm, as the intensity and frequency of the lightning and thunder closed in on us, our house took a direct hit. Fortunately, it had lightning rods, as did the barn. It was so loud and scary. All became dark as the power went out, and thankfully as my husband and I clung together and looked about us, there were no flames. In the thick darkness, as the storm moved away, we were left wondering how much damage had been done. But in the darkness, we did not try to find out until morning. Mostly, we worried about our cows and precious calves.

In the morning light, we were thankful that we were fine and all of our animals also were. The electrical damage was tremendous. Appliances in the house were gone, our electrical motors and units in the barn were blown out. We could not milk for quite a while until our electrical servicemen restored our milking system and some of the units, and it took weeks to replace the damage to our many machines.

The electrical fence controllers on both sides of the road were literally blown apart and scattered apart. We depended on our animals to honor the fence, and they did. A calm state of mind is needed for animals to respect their boundaries, and we are pleased that they stayed within.

Anyway, moving on, my Caught in the Thunderstorm batik portrays Nature’s power in the sky. The dark horses in the top part are darting in the wind as lightning and thunder. The red horse hides below, waiting for the storm to pass.

This batik will be shown at the Bedlam Farm Open House on the weekend of October 10 and 11, as will more of my artwork. There will be lots of artists, poets, writers, musicians, and demonstrations at the farm that weekend, and I hope that you may be able to come and share in all of the excitement. 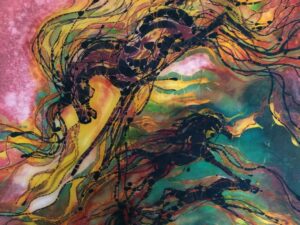 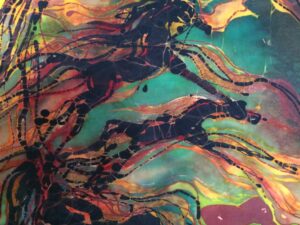 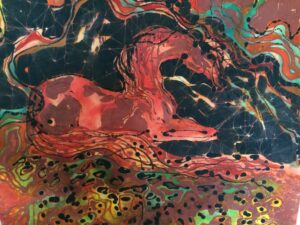 Waiting for the storm to pass

So glad you’re going to be at the Open House with your work Carol. I love the story behind this piece and am thrilled to have it in my gallery!

Hi Carol, I have just discovered you while searching the vendor list for Southern Adirondacks Fiber Festival. We share some similarities in that we are both artistic and found ourselves drawn into the significance of farming. I am a shepherd, fiber artisan, photographer, and potter who also studied silversmithing many decades ago in college. I have never tried batik and yours is magnificent, a reflection of great sensitivity to the beauty of nature and animals. Finnsheep were my chosen pursuit more than 20 years ago and have taught me many lessons and enriched my existence beyond measure, just as your own cows have created a life path. I hope to meet you someday and see more of your batik art. Even at this point after reading your story I feel a sense of connection.

The sense of connection with our animals is beyond comparison. We both tap into that animal spirit. There were so many people at the festival — did we meet? It was a wonderful festival, so many beautiful things and I didn’t get to walk around and see many of them closely, but enjoyed the whole event.

Wow…the batik is gorgeous and the story is scary ,but beautiful!