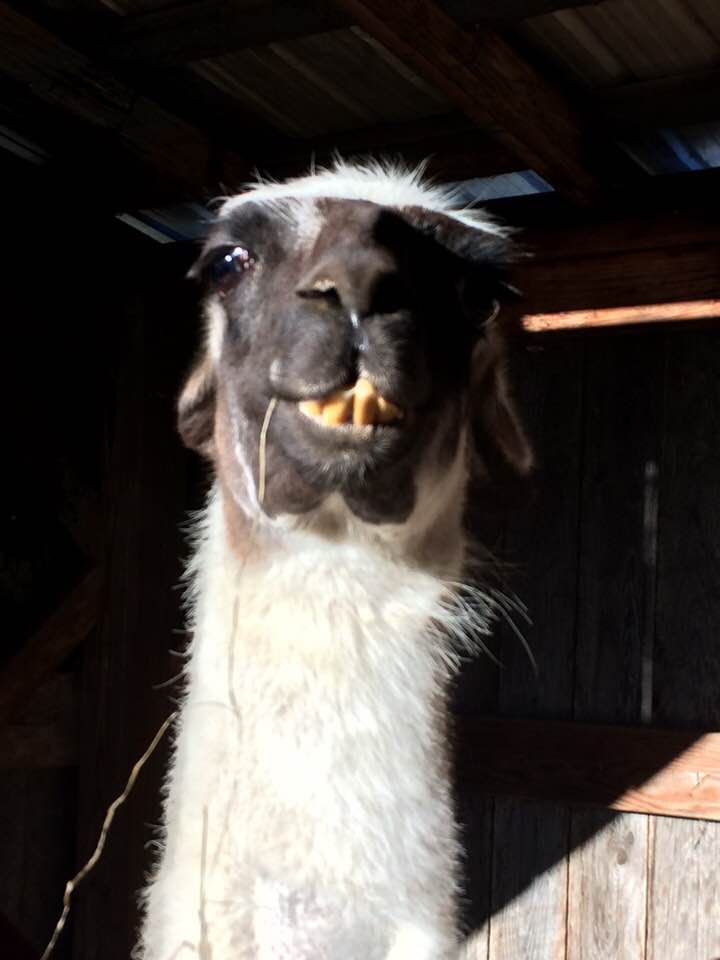 A sick llama is a grouchy llama 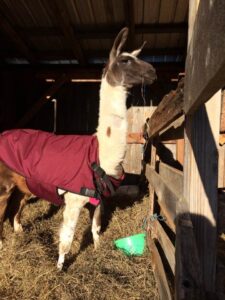 Vanilla in his coat, back on his feet

It was Saturday morning that I went out to the barn and my llama Vanilla lay in his stall, and did not bother to come to eat his grain.

This has never happened.

He’s always had a very healthy appetite, and when I saw that I knew he was very sick. He did get up. He was very cold. And he tried to pee and he couldn’t. I could tell something was drastically wrong with him right away. It is strange that the day before, a friend was over helping me clean down Star’s stall and remarked that he wasn’t even spitting; He must be getting sick. But he was eating and drinking so well, I still thought he was fine and getting friendlier.

So I called the veterinarian. Of course, it was Saturday, and that required the extra emergency fee and overtime, but I was glad I did.

Apparently Vanilla had a urinary stone which many, males especially, can get. Unfortunately, llamas have a more difficult stem to the bladder than other species do. It has an angle in it, making it very difficult to access. My veterinarian gave him injections of antibiotics, Banamine which is an anti-inflammatory as well as a painkiller, and then he had to be anesthetized to try and clear the stone from his bladder.

Poor Vanilla! He was so cold. He looked so miserable.

And after working for over 45 minutes, an improvement was made on this cold dreary day, but there was still no certainty that everything was cleared out. Vanilla gradually was able to get back on his feet and although he was weaving a bit, he held his head as high as he could as though to shake off the indignity that he had just experienced. 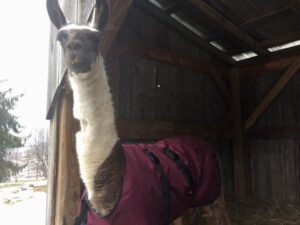 He really doesn’t like me to talk about this, but so many people have asked, that I have to say something.

During all this, it appeared that the bladder had constricted his whole digestive system, and his stomach and intestines were not even functioning at that time, likely because they were blocked. So he was also given probiotics and medications to stimulate his stomach to return to normal. Then he was supposed to get shots, probiotics and an ammonium chloride solution drenched down his throat daily for four days.

Well, I was able to give the injections with the help of neighbors – brave neighbors that is, because he is not that easy to handle. And thanks to the treatments, his ability to have his stomach function and for him to spit it back at people returned very quickly. So my friend Monica came over to help me on Sunday morning and we did deliver the shots and we put an extra fleece pad under his blanket for warmth.

But when I tried to give him the ammonium chloride solution to drench it down his throat, it was a disaster for many reasons. One, llamas have an extremely long neck. Two, he was throwing back his cud at me, which is pretty wretched because it basically is throw-up, when I was trying to administer the treatment. And consequently, the treatment wasn’t going down. He kept fighting me while tossing his head to have me gouge his mouth with it and he started bleeding. He started choking because he was spitting back his cud and it was awful. 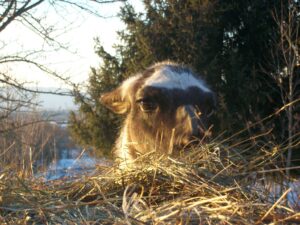 “Another step and I’ll spit!”

Then he fell down and he acted like he was going to die, and Monica and I were trying to revive him and he was gasping for breath.

I just didn’t know what to do. Neither of us did.

But we kept supporting Vanilla, and after five minutes he managed to get back on his feet and again, held his head very high in the air, more insulted than ever. So this is why I have a very grouchy llama, and I really can’t blame him. I did call the veterinarian and told her I just couldn’t give the ammonium chloride, and she is seeking to find a coated bolus that we could give him so the medication would reach his stomach without irritating him.

The history of Vanilla is that way back my neighbor bought him and a buddy of his at an auction. The tale was that these two llamas had been in a field with some horses, and the woman who owned them had died, so they went to the auction. We don’t really know how old Vanilla was at that time. He is likely older than thought. My neighbor jokes that he saved these llamas and they should be grateful to him, and they probably were, in their own way.

But when I got Vanilla a few years later and he came to my house, I was told that he used to rush over to the fence to people and he would spit on them. 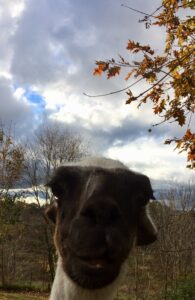 “I don’t need any more shots!”

I thought Vanilla was the most wonderful llama, because when I first went to see him, he rushed over and kissed me. I thought it would always be a honeymoon. But that was not to be! It took three years for me to be able to look him in the eye and have him not put on his grouchy face. The first time he was shorn of his heavily matted coat (I don’t think he had been shorn in his life) he spit at me for a month. Still, we persisted living with each other and me waiting on him, and him occasionally greeting me with a nice kiss.

He has a beautiful stature about him, very elegant, and he can be friendly. When he would come to me at night out of his pasture to get his special grain and a treat of an apple, he would always remind me of a unicorn coming out of the twilight. Something magical about him. Now he has his llama coat, and his well-bedded stall, and his medications, and me and friends of mine – brave friends! – come to help me straighten out his blanket to keep it in the proper position. And I hope he will return to being a healthy llama.

He is acting pretty good today and he doesn’t need any more shots, thankfully. Without those shots, I think he will return again to being a friendly, happy llama. I hope so.

I was exhausted and probably as traumatized as Vanilla. And I was afraid he might die.

I also didn’t want this to be our last experience together. I feel that in trying to make animals and humans well, we can expose them to some awful things, many of which they would be better off without. 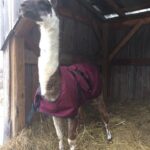 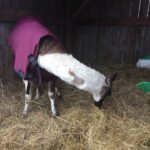 You can see where his neck was clipped. 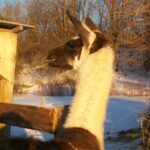 Love your LLAMA Vanilla and all that he went through though. There is a local lady here who sells her coats actually her fur for the coats.. I was glad to be able to get some coat hair now it became a sweater I am wearing, so comfy. her name is Jezabel the fur came from. We live in a small town in Florida where we can keep our pets hair and turn them into sweaters.

So glad you like my llama tales Linda. Vanilla can be grouchy but he is really a delight.
I love the llama hair. That must be one soft sweater.