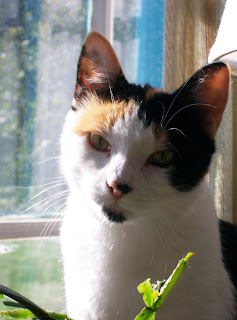 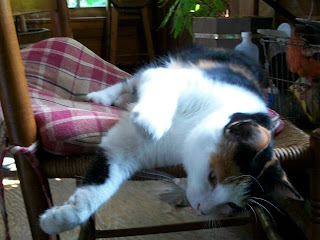 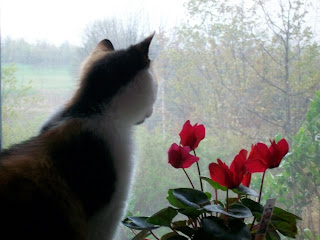 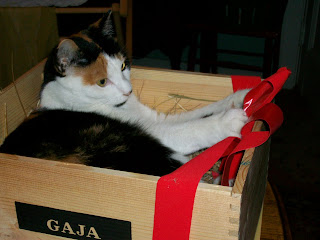 In 2009 I was trying to feed and capture a young calico cat. I named her Champion for surviving the winter outside; snow, wind and cold!

Champion was an inquisitive kitten that was raised off away from the barn on the farm that I help raise calves on. She would climb to the top of a stack of round bales when she heard me call last summer. She knew I had her food, but when I put it down I had to back away before she would come forward to eat. She would dart away if I came too close.

Born late in April of 09, as the cold weather came on I tried to coax her to the main barn where she could have food, shelter and company. Always something would scare her away; a tractor, a dog or too many humans. When in December, I finally coaxed her in the back door of the barn to eat, a barn cat attacked her and I did not see her for a week.

The week went by that I hadn’t seen her. I had continued to put food out for her off close to where she used to be fed. Often other cats would sneak up to eat the food and after waiting for her for what seemed like quite a while in the winter evening cold, I would leave hoping she might get some of the food. One dark night (night because that was the quietest time on the farm and she was most likely to appear) I walked off farther from the barn calling her. Yes I am just a bit crazy! I heard her answer several meows. I kept calling and she kept answering, coming closer, until finally when I backed away, she stepped forward and ate her food happily purring.

I’d like to say that she soon became friendly, but it was not so. I brought her some special food on Christmas day, but she spent the winter outdoors, being fed next to an abandoned shed through the cold winter nights. Finally in the spring with the help of a havahart trap she was captured and off to the veterinarian as she had a badly abcessed leg.

I’m happy that Champion is here living with my husband and me stretched out by the woodstove. This year she will spend Christmas here, and it will be a present for us all.