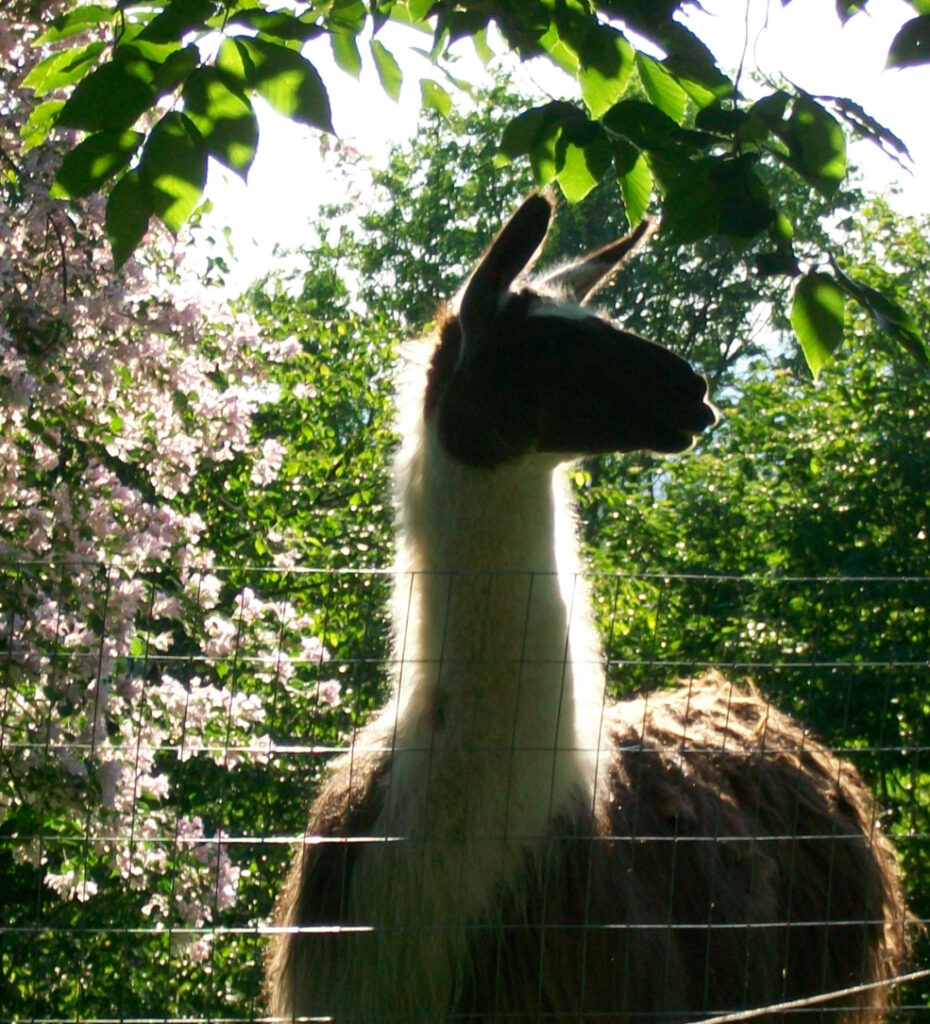 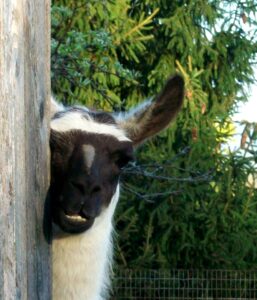 He felt kind of grouchy and shy after he was shorn.

He ran over to me and gave me a kiss…I fell in love. “This is the llama for me!” I thought.

Our neighbors had bought two llamas many years back right before we sold our farm and they were fascinating to me and Dick too. We now lived up the hill from our old farm and I had my cow Steppin Up with me when she was not milking at the Hoyt Farm, but she was getting older and it was harder for her to be an efficient part of a working dairy. I decided to retire her and keep her here for the rest of her days. But she needed a friend. When our neighbor announced he had lost his long time job in a recent reorganization and had to part with many horses and the llamas it clicked. A llama would be perfect!

There were two llamas however, both males and I never saw them together. They had three horses in with them and all seemed to adjust well to one another.

A good fence was needed. They would not be so respectful as Steppin about being content with one little polywire strand to keep her in place. I got tall posts and the wire mesh fence and began the long installation process. With help at the end to finish the project, the pasture was ready and the llamas arrived. 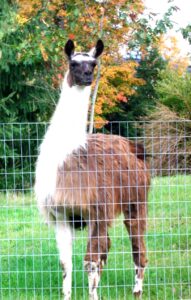 Vanilla was a fancy fella; white, brown and black — a calico, were he a cat. The other llama (whom I named Chocolate Latte) was brown and ragged looking, tall and much older than Vanilla. He was very distant; I could not get near him. The pasture had good grass and water and I would give out snacks but Vanilla was the only one who came up to get them.

I soon found Vanilla did not like many things: To be brushed, to be shorn, to have his back patted, and to stare in to his eyes was seen as a challenge. He could spit as llamas are known to do. The neighbors told me, “Oh yes, he liked to rush up to the fence when people stopped by and then he would spit on them!” Now they tell me!

Most of the time he was good and I have found that many people like to encourage bad behavior in animals by teasing so I am not sure it was all Vanilla’s bad manners. Some days I got a kiss but some days he was just in a grouchy mood.

All went well and then the day came when Steppin arrived from the milking herd for retirement. 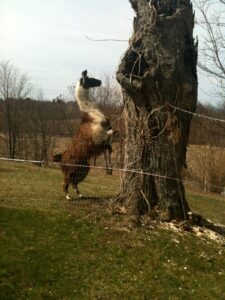 He’s happy at spring. He could play on one of the basketball teams.

Vanilla was so excited! He fell in love and did an elaborate mating dance. Steppin had never seen a llama before and was very curious but Vanilla was inclined to put his ears back in a warning (like horses do) in spite of his attraction. The poor other llama just kept to himself.

As summer came on, I tended to pasture weeds and stepped into the llama pasture to cut back weeds. I saw Vanilla look at me down the hill and the brown llama at the lower side of the pasture where I was heading. He swung into action, tearing down the hill and attacked the other llama with a vengeance! The screams and growls llamas can make are indescribable, terrifying!

There was no end to this battle. There was spitting and llamas actually hate the smell of their own spit and would stand back, mouths open airing out. They were scary looking. I called my neighbor and no one was there but they called later and everyone thought they would settle down. They continued to fight and scream all day and night, and five days later it was agreed they must be separated. They were bleeding when the other llama was led away — which was not an easy thing to do. 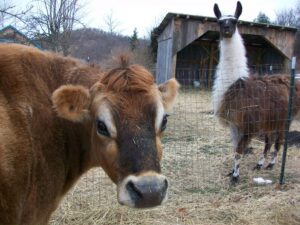 Two friends together on a cloudy day in early spring

I kept Vanilla and many said, why did you keep the vicious one? Because he was friendly to me, I could pat and feed him and in his mind he was protecting. I always knew llamas were used as guard animals but I did not realize how powerful they could be. I think too that Vanilla had been put in his place by the horses at my neighbor’s farm but here he was king. It went to his head all right.

He is watchful and feels secure here in his home with his person and his cow. I did get Vanilla gelded as is recommended for males of many species and he is just a bit more peaceful. As you look at the males of the animal species, not to mention the humans, you can see that the testosterone impact creates a lot of aggression, violence and possessiveness and creates a certain danger. Experienced llama folks would ask, “What were you thinking? Two males?”

Live and learn. I enjoy having Vanilla here and seeing how regal he looks and how he leaps in the air to impress me and anyone who stops by. He loves women but is not so friendly with men. He and Steppin are happy and they both help mow the sloped pasture and add a special touch to our homestead. 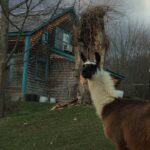 The thunderstorms come through and Vanilla is on guard. 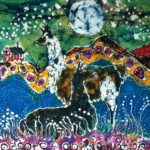 This batik was inspired by Vanilla and his frenemy that I called Chocolate Latte. 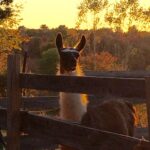 Vanilla waiting for supper at sundown